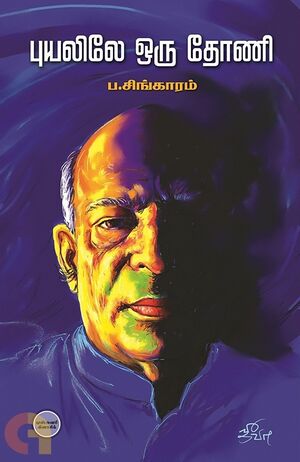 Puyalile Oru Thoni (1972) is a novel written by Pa. Singaram. The novel traces the migration of the Tamil people overseas, and looks back at Tamil culture with a critical eye. Considered a shining example of non-linear writing, and a satire of the highest quality, Puyalile Oru Thoni is regarded as a great accomplishment in the line of Tamil novels.

Pa. Singaram tried many different ways to have Puyalile Oru Thoni published, but the publishing world of that time did not accept the work. It was eventually published in 1971 by Kalaignan Padhippagam at the initiative of journalist and writer Malarmannan, notes literary critic, C. Mohan. Though there were claims that the novel was edited and shortened, these claims have been denied by Masilamani of Kalaignan Padhippagam. Although Pa. Singaram wanted to improve the work for the forthcoming editions, it remained unchanged as he had mentally moved on from the work.

Ki. Rajanarayanan wrote a letter about Puyalile Oru Thoni and appreciated the author Pa. Singaram. C. Mohan notes that this led Chitti and C. Sivapadhasundaram to meet with Pa. Singaram. They spoke highly of the novel and took the only available copy from him and told him they would bring it out in its entirety. However, as C. Mohan goes on to note, Pa. Singaram did not hear from them later. The research work Tamil Novel Noottrandu: Varalarum Valarchiyum (100 years of the Tamil Novel: History and Evolution) written by Chitti and Sivapadhasundaram in 1977, did not mention either of Pa. Singaram's novels, Puyalile Oru Thoni or Kadalukku Appal, says C. Mohan.

Neither the literary readers not the critics of the time accepted Puyalile Oru Thoni. Ka. Naa. Subramanyam only regarded it as an autobiographical account. Sundara Ramasamy, Pramil, and Venkat Saminathan opined that it was a novel whose form was flawed and that the second half of it was merely a flat adventure. For a long time after 1972, the novel was not republished. Only Ki. Rajanarayanan called it a masterpiece and wrote a letter of appreciation to Pa. Singaram.

While literary critic C. Mohan continued to talk about Puyalile Oru Thoni, his reviews were considered biased as he was from the same place as Pa. Singaram. In 1987, C. Mohan wrote an article about Tamil novels for the journal Pudhuyugam Pirakkiradhu, in which he rated Puyalile Oru Thoni as one of the three best novels written in Tamil (Mogamul and J.J. Sila Kurippugal were the other two). This sparked a discussion in the literary milieu connected with little magazines, thereby, drawing attention to Pa. Singaram and Puyalile Oru Thoni. When Vasantha Kumar, who was the editor of Pudhuyugam Pirakkiradhu, founded Thamizhini Publishing, he brought out both Puyalile Oru Thoni and Kadalukku Appal as a single book. Pa. Singaram died while the publishing was underway.

In the aforementioned book that was published in 1998, Jeyamohan wrote a lengthy essay called 'Varalaatru abadhathin darisanam' (A perspective on the absurdity of history). That foreword provided a detailed explanation for why Puyalile Oru Thoni had received negative reviews in the modern literary milieu up to that point. It argued that Puyalile Oru Thoni should be read as a centerless narrative with a polyphony of voices and as a great expression of satire. The essay stated that the novel's aesthetics were postmodern. After 1998, Pa. Singaram gained widespread acceptance. Puyalile Oru Thoni came to be accepted as a new kind of novel and a great achievement in modern Tamil literature.

Puyalile Oru Thoni is not a novel with a traditional, linear storyline. The story takes place between 1930 and 1945 against the backdrop of the First World War. The protagonist Pandian, born in Chinnamangalam, grows up in Madurai, and moves to Medan for work. The events of the novel take place in cities such as Burma, Penang, Singapore, Malaysia, and Bangkok.

The story begins with the protagonist, Pandian, watching the Japanese army landing in Medan, Malaya. With this invasion forming the backdrop, the novel grows by layering on the money lending business of the Malayan Tamils, the way in which they drink at various inns and make merry with prostitutes, as well by capturing their debates. The pseudo-pride about Tamil culture is parodied and criticized through these dialogues.

There are a number of notable critiques about Puyalile Oru Thoni, such as:

Puyalile Oru Thoni is considered an important literary work for its amorphous form, excellent satire, and for innovating a poetic style of writing in certain parts. In the conversations that take place in the entertainment lodges of Malaya, Pa. Singaram mocks the phony pride and pretense of Tamil culture. The racy language and the parody achieved through sparse dialogues make the novel a stimulating reading experience. The Chinnamangalam and Madurai depictions that are related through Pandian's memories presented a new style in Tamil prose.

When sailing, Pandiyan's memories erupt like waves in a stormy sea. In parts such as this, the writing offered poetic moments rarely seen in Tamil fiction until then. Even though the latter part of the story ends up being a simple adventure, the quarrel with the Englishmen in the hotel and the conversations that take place there, are full of great satire. The novel does not have a central vision, a cohesive story, or a fully developed character cast. On the contrary, it has a scattered form, a language that manages to bring together a diverse set of things and holds in tension dichotomous layers of fiction. For instance, while critiquing the heroism of the Tamils, it also constructs Pandian as a hero. This polyphony of voices is also a reason the novel is considered a triumph in Tamil literature.