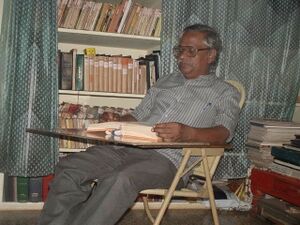 Dr. A.K. Perumal (A. Kaakum Perumal) was born in Parakai, Kanyakumari district, to Azhagamperumal and Bagavati Amma in the year 1947. Parakai also known as Paravaikarasanur and Pakshirajapuram is a seat for Vaishnavism. A.K. Perumal's full name is A. Kaakum Perumal. His father Azhagamperumal worked as a Malayalam teacher and as a court interpreter.

He got his school education from the Parakai Government School. He completed his bachelor's degree at the ST Hindu College, Nagercoil and began working as a journalist. He then joined the Government College, Chittur, Palakad for postgraduate studies. Dr. Jesudasan was one of the professors who taught him. He intended to do his PhD research on S. Vaiyapuri Pillai under the topic "Vaiyapuri's estimations on dating Tamil literary texts", but was unable to pursue it. Instead he did his doctoral thesis on "Villupaatugal (literally bow-songs, sung by folk singers sitting before a bow balanced on its side) of Nanjil Nadu" from Madurai Kamaraj University and got his PhD. Stuart Blackburn, who later wrote "Inside the Drama-House: Rama Stories and Shadow Puppets in South India" and other such books, was a fellow student. 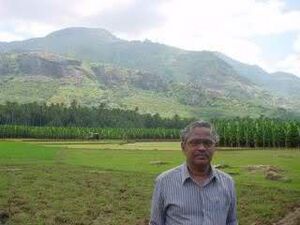 Dr. A.K. Perumal married Devakumari on February 6th, 1983 and has a daughter, Ramya. He worked for four months as the assistant editor at the Dinathanthi magazine, Trichy in 1969. He began his career as a Professor of Tamil literature at the Arignar Anna College, Aralvaimoli in the year 1973, retiring in 2006. He resides in Nagercoil.

In June 1972, A.K. Perumal met Sundara Ramaswamy (known as Su Ra). They were neighbors at the time and so A.K. Perumal got himself acquainted with writers like N. Parthasarathy, C.S. Chellappa, Premil, Ka.Naa. Subramanyam and made use of Su Ra's huge library. 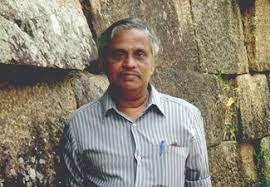 A.K. Perumal began his career as a literary researcher and later contributed to other fields like folklore, archeology, and literary history.

A.K. Perumal published Venkat Swaminathan’s magazine Yatra from Nagercoil for a significant period of time. In one of the issues, Venkat Swaminathan wrote about the need for research into folklore. Encouraged by this, A.K. Perumal started engaging in folkloristic research. He wrote articles on folk artforms like Kaniyan Koothu and Isakki Amman Kadhai for the magazine. He published a research article on Villupaatu that marked the beginning of his career in folkloristics. When a Department of Folklore was established in St. Xavier's College, Palayamkottai, A.K. Perumal studied folkloristics under its organizer Fr. Jayapathy. He attended a class on folklore research by Professor Alan Dundes. He has worked with folklore researchers, T. Lourdes and Ramachandran.

He researched extensively on the art of shadow puppetry or shadow play (Tholpavai Koothu) and published an introductory text called Tholpavai Koothu. His Ramayana Tholpavai Koothu includes a recorded version of the Koothu’s oral text of Ramayana along with detailed commentaries based on his research. He has published a study on the oral text of Villupattu of Kanyakumari, and six stories including the story of Ponnirathal Amman, the story of Poolangondal Amman, and the story of Thambimar. He compiled and published an encyclopedia of folk artforms for the department of folklore at St. Xavier's College, Palayamkottai. He has written books like Sadangil Karaindha Kalaigal, Deivangal Mulaikum Nilam, Sunnambu Keta Isakki on folkloristics and his folklore research experiences.

A.K. Perumal has done thirty years of research in regional microhistory. His method is to carry out historical research through the lens of folklore studies. A.K. Perumal says, "The cultural history of Tamil Nadu should be rewritten from a folkloristic perspective in accordance with the theory of historical reinterpretation. This would transform cultural history of Tamil Nadu as it exists today. Some historical details would become more lucid."

A.K. Perumal's research methodology is a systematic collection and presentation of basic data from documents and inscriptions, which offer a complete picture of the history on their own.

A.K. Perumal authored many books backed by original literary research conducted using S. Vaiyapuri Pillai's research methodologies. Vaiyapuri Pillaiyin Kaala Araichi was his first book. His books on Tamil literary history include Thamizilakkiya Varalaru and Thamizharingjargal. A.K. Perumal's Ilakiya Aivugal records the history behind the publication of texts and their historical backdrop. However, his area of research does not include aesthetics and sociology.

He published the works of Kavimani Desigavinayagam Pillai with detailed analysis. He also published critical editions of Devasagayam Pillai Koothu and Vaikundarin Agaval with commentaries.