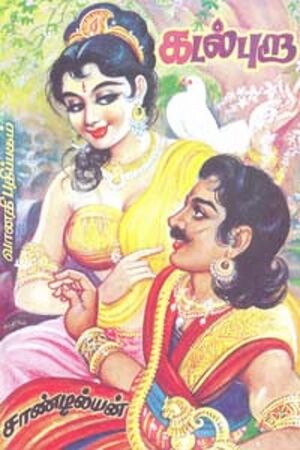 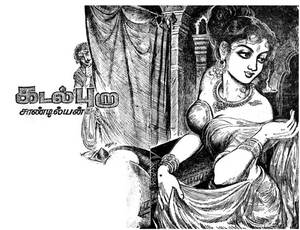 Kadal Pura (Sea Pigeon) (1974) was a historical adventure novel by Chandilyan. The novel was set against the backdrop of Karunakara Thondaiman's (the protagonist of the short epic Kalingathuparani) victory over Kalinga.

Kadal Pura was written as a series in Kumudam magazine in 1974 and was published as a book by Vanathi Publications.

In the foreword to this story, Chandilyan cites Bhojan's Yukti Kalpataru- a book on the construction of wooden vessels, Professor Radha Kumud Mukherjee’s Indian Shipping, Dr. Majumdar's Suvarnadvipa - a book on the history of Kadaram and the genealogy of the Shailendras, K. A. Neelakanta Sastry’s notes on the Kadaram war during the reign of Veerarajendra and the historical books of Dr. S. Krishnaswami Aiyangar and Shri. P.T. Srinivasa Iyengar as his references.

Anabaayan crowned as the First Kulothunga (Kulothunga - I) was engaged in resolving the conflict for the throne of the Sri Vijaya empire and maintaining peace in the region from 1063 to 1070 C.E. In the year 1077, a delegation of Tamils led by Devakulo reached China. Chandilyan notes that Devakulo refers to Kulothunga. Chandilyan also includes Kalingathuparani which portrays the story of Kulothunga's chief commander Karunakara Thondaiman's conquest of Kalinga as a reference.

Kulothunga Chola - I (1070-1122) was mentioned in the inscriptions as Anabaayan. According to Kalingathuparani, he was born to Rajaraja Narendra, the eastern Chalukya king who ruled Venginadu and the Chola princess, in the Gangaikonda Cholapuram palace, and was adopted by Rajendra Chola as his successor. But prince Anabaayan did not attain the throne after the death of Rajendra Chola. Adhirajendran, who was also Rajendra Chola's son, assumed power in 1070 C.E. under the name of Kulothunga Chola. It is possible that Anabaayan was adopted because Adhirajendran was ill. Adhirajendran ruled the kingdom only for a few years .

During the reign of Kulothunga - I, the boundaries of the Chola kingdom were vast. So there were constant battles with all the frontier kingdoms. Internally, there were conflicts between the Valangai (right hand) and the Idangai (left hand) caste groups. But Kulothunga I is regarded as one of the greatest kings of the Chola period. With powerful commanders like Prince Rajendra Chola, Arayan Kalingaraya, Senapati Irungovel, Arayan Sayanthan Karunakara Pallavan Udayan Adittan, Arulmozhi Rajadhiraja Vanathirayar, Azhagiya Manavala Nambi and Raja Raja Maduranthakan, Kulothunga I conquered countries such as Chalukyanadu, Cheranadu, Eelam and Vengi in battles and subjugated them.

Kulothunga I fought two Kalinga battles. When the Kalingas tried to capture Vengi, an ally of the Chola kingdom, the Chola forces led by Prince Vikrama Chola with the support of Kalingaraya and Karunakara Thondaiman, defeated the Kalingas. The second Battle of Kalinga was fought under the leadership of Karunakara Pallavan, Arayan Kalingaraya and Arayan Rajanarayanan. Kalingathuparani composed by Jayankondar portrays this battle at length. Kalinga was said to be completely destroyed in this battle. It is speculated that this battle happened in the 33rd year of the coronation of Kulothunga Chola I (1102 C.E.).

Karunakara Thondaiman conquered eastern Ganganadu, ruled by Ananthavarman Chodagangan (1077-1150). This was one of the three Kalinga kingdoms. The Ganga king was born to Rajaraja Devan and Rajasundari, the daughter of the Chola emperor Veerarajendra. The Kalinga invasion by the son-in-law of Kulothunga Chola (also referred to as grandson by some historians) might have been the result of conflicts within the family.

The protagonist of the story is the commander of the Chola army, Karunakara Thondaiman. In order to fight against the tyranny of Jayavarman in the Sri Vijaya kingdom, his younger brother Gunavarman seeks the help of the Cholas. Gunavarman moves to Kalinga's Palur Perundurai along with his daughter Kanchana Devi. The king of Kalinga is a friend of the Sri Vijaya King Jayavarman. So Jayavarman plans to kill Gunavarman with the help of the Kalinga king. When this news reaches the Chola king Veerarajendra, he directs Karunakara Pallava to Kalinga to rescue Gunavarman and his daughter Kanchana Devi. Veerarajendra also writes a note of peace and orders him to deliver it to Bhima, the king of South Kalinga.

But Bhima does not honor the peace note and places Karunakara in jail. He also plans to conquer the Chola command of the seas. Karunakara escapes from Kalinga after multiple adventures. Kulothunga I (Anabaayan), the son of Veerarajendra helps him. Anabaayan's companion Amir, an Arab, and his teacher Aguda, a Chinese, also stand with him. With the help of Aguda, Karunakaran learns the strategies of sea battles, transforms the ship that he received as a gift from Aguda, into a warship called the Kadal Pura (Sea Pigeon), and performs various feats to save the Chola merchants from pirates. In Mohini Island (Island of the Enchantress), Karunakara meets Manjalazhagi, who falls in love with him. However, on account of his duty and in memory of Kanchana Devi, he is unable to accept Manjalazhagi, but regrets not being able to forget her. He then happens to save Kanchana from pirates. He captures the Sri Vijaya empire and seats Gunavarman on its throne. At the request of Jayavarman, who lost the battle, Veerarajendra Chola arranges the marriage between Manjalazhagi and Karunakara Pallava.

Kadal Pura touches lightly upon the Chola - Kalinga battles, the Chola’s intervention in the politics of the Sri Vijaya empire, and the political problems of the Sri Vijaya empire. This novel was mostly influenced by British pirate novels and elaborates on naval adventures. The landscape descriptions are entirely imaginary in this novel and is the least historically accurate among all of Chandilyan's novels. European literature has had a fair share of novels with high adventure, set in fantastical lands ever since 'The Adventures of Ulysses'. The main contribution of this novel is that it brings that aspect to Tamil literature.