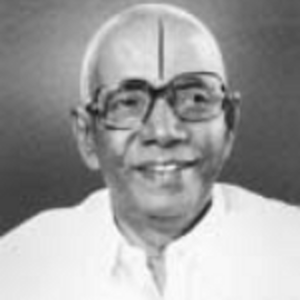 Chandilyan (R. Bashyam Iyengar) (November 10, 1910 - September 11, 1987) was a prolific writer of historical adventure novels in Tamil. Influenced by Walter Scott [1] and Charles Kingsley[2], he wrote novels that were filled with royal conspiracies and elaborate descriptions of voyages. Of his novels, the ones that were serialized in the Kumudam magazine, were very popular.

Chandilyan was a Tamil Vaishnavite. He was born to Ramanujam Iyengar and Poonkovilvalli on November 10, 1910 in Tirukovilur. Bashyam Iyengar, was his given name. Thiru Indalur, a village near Mayavaram, was the family's native village.

Chandilyan started his education at Nannilam Pannainallur Thinnai Palli (veranda school: the veranda of the teacher's house was effectively the school). Later he studied at Saidapet Model School, Pachaiyappa's School and National Model School. He graduated from St. Joseph's College, Trichy. While in college, he was influenced by C. Rajagopalachari (Rajaji), and joined the Indian freedom movement. Soon, he became a member of the Indian National Congress.

In 1929, he married Ranganayaki, the daughter of Srirangam Sadagopacharya. They had two sons, Sadagopan and Krishnan and five daughters - Vedavalli, Pushpavalli, Vijayavalli, Padma, and Lakshmi. Sadagopan became a professor. Krishnan retired as Principal of Vaishnava College. Padma Chandilyan is a musician. Film composer Sean Roldan is the grandson son of Chandilyan (Padma’s son). His first name, Sean, is an abbreviated version of the name Chandilyan. 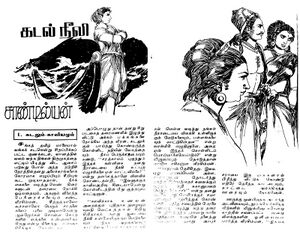 After graduating from college, he moved to T. Nagar, Chennai in the 1930s. He became friends with Kalki Krishnamurthy, a famous writer who lived nearby, and V. Swaminathan, the editor of the weekly Navashakthi, run by Thiru.Vi.Ka. Encouraged by them, Chandilyan started writing short stories. His first short story Sandha Seelan was published in Dravidan magazine by its editor Subramaniam. Editor Kalki published his short stories Kannammavin Kadhali and Adhirshtam in Ananda Vikatan. After that, he studied the Tamil language formerly with a Tamil scholar named Thirukkannapuram Seenivasachariyar. He continued to write short stories for Swadesamitran weekly. He assumed the name of his gotra (lineage of a Hindu family tracing back to an ancient sage), Chandilya, as his pseudonym.

Palaivanathu Pushpam and Shantha Deepam were his early historical novels. Chandilyan’s first novel to gain popularity was Jeeva Bhoomi, the story of Rajput warriors from Rajasthan. He had already written short stories about Rajput warriors in the monthly magazine Amudasurabi. Following the fame the novel attained after being serialized in Amudasurabi, Chandilyan continued to write in the magazine. The first series he wrote in the Kumudam was Kanni Madam. 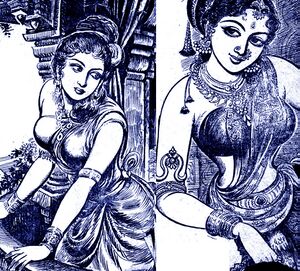 For about thirty years, Chandilyan wrote a series of historical novels in the weekly, Kumudam. His first novel to appear in Kumudam was Kanni Madam, which was published in 1956. His second, Mannan Magal, was published in 1958. That was the first novel of his to become a runaway success. His novels soon become an important ingredient for Kumudam's success. The magazine had a custom of publishing the first episode of a new Chandilyan novel in the same issue in which his previous novel ended. His longest novel was Kadal Pura, which ran into approximately two thousand pages. Episodes of his unfinished final novel Seenathu Singari was still being published in Kumudam, when he died.

In 2009, the Tamil Nadu government offered to nationalize the works of 28 writers, including Chandilyan, and to recompense their heirs. Chandilyan's heirs refused to accept the offer.

While working for the Hindustan Times, Chandilyan developed a friendship with B. Nagi Reddy of Vijaya Vauhini Studios, and the actor Chittoor V. Nagaiya, which paved way for his entry into the film industry. He worked with Nagi Reddy in Vijaya Studio's story department. He helped in writing screenplays for two films, Svarga Seema (1945) and En Veedu (1953). He later wrote about his experience in films in the book Cinema Valarntha Kathai (1985).

Chandilyan served under the presidentship of Kalki in the Tamil Writers' Association in 1956. After Kalki’s term, Chandilyan and Devan contested for the position. Devan won the election.

In 1962, along with Vikraman and T.N. Kumaraswamy, he co-founded the Writers Co-operative Society to bring the works of Tamil writers' in print and provide financial assistance to writers but the society soon became defunct.

He was instrumental in the formation and development of the two music academies, Thyaga Brahma Sabha and the Krishna Gana Sabha.

Chandilyan passed away on September 11, 1987 in Chennai.

From 1935 to 1945, Chandilyan worked as a reporter for Swadesamitran. Under the guidance of its editor C.R. Srinivasan, he worked as a news correspondent for High Court cases. He also worked as an assistant editor of the English daily, Hindustan Times. In 1937, he met M.K. Gandhi and interviewed him.

In 1982, he started the monthly Kamalam with the objective of publishing his own stories. However he was unable to succeed in the endeavor and quit, which ended the magazine's publication.

Adventure characterized all of Chandilyan’s novels. The young protagonist navigates various dangers and succeeds in the end. Imaginative hyperbole could be seen in his character making. In general, there were no negative characters and it was his nature to portray all historical figures as great men. Chandilyan’s novels drew a great number of readers, replicating the success of Kalki’s historical fantasy novels. By the standards of his times, he pushed the envelope on the depiction of sexuality in his novel. This was a key reason for the attention that his works garnered. He followed the aesthetics of the Sanskrit epics in such depictions.

In his book Naveena Tamil Ilakkiya Arimugam (Introduction to Modern Tamil Literature), the writer, Jeyamohan says: 'Chandilyan’s novels present the various historical periods of the Tamil land to the general reader. Adventure fiction is the artistic expression of the youthful self-assuredness while facing life and it is healthy to grow up reading such works. Children's adventure literature expanded on the big screen - that is what his novels are. Reading Chandilyan at a particular age in your life is important. Self-confidence, the importance of self- reliance and taking initiative, and friendship - these are the messages the his works underscore.'