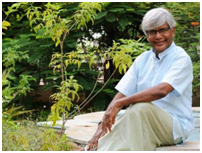 Maunaguru (Birth: June 09, 1943) is a professor, researcher in performing arts, Therukoothu artist, trainer and director, a literary historian on Eelam literature and a writer.

Maunaguru was born on June 09, 1943, in Seelamunai, Batticaloa, near Amirthakali. He was born to Chinnaya and Muthammal as their second son. He studied at Amirthakali Methodist Mission School until his fifth grade (1948-53), and studied at Vantharumoolai Central College from sixth grade until his final years of schooling.He held leadership positions in his class, hostel, hostel cafeteria, Vipulananthar sports club, Tamil Mandram, Hindu Mandram and NSS, and was an outstanding student while at the Vantharumoolai Central College. He was also a part of volleyball and football teams. 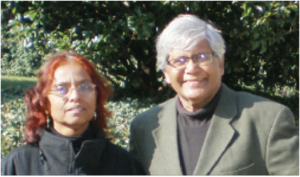 Maunaguru married Chitralekha in 1973. Chitralekha is one of the most prominent female writers of Eelam who works as a Professor in the Fine Arts at the University of Batticaloa. She compiled and edited a selection of poems by various female poets, released under the title Solladha Seidhigal. She received the UN High Commissioner for Refugees (U.N.H.C.R) Award. Their son, Siddharthan, is a professor of anthropology at the National University Of Singapore. 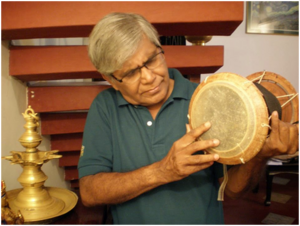 Maunaguru started his teaching career at Kalmunai Zahira College (1966-70). He worked as a writer of textbooks (1971-75) and again went back to teaching (1976-81). He worked as a lecturer at the Teacher Training College in Palaly, Jaffna (1982-83), as an assistant lecturer of Fine Arts at the University of Jaffna (1984-88), and as a lecturer for the Master’s degrees (1989-91). He has served as a lecturer for the Master’s degree, as a principal, and as the Head of Faculty of Fine Arts at Eastern University. In 1997, he served as the Acting Vice Chancellor of Eastern University. He worked as a coordinator at Swami Vipulananda University (2003-05). He retired from government service in 2008. 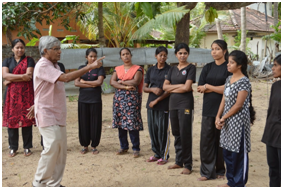 Maunaguru’s father was involved in arts and drama of the village; hence, Maunaguru was also naturally inclined towards them. In 1959, at the age of 16, he enacted Pasupadham, a koothu on stage at Vantharumoolai University. This was his first theatrical experience. In 1964, as a college student, he played Ravanesan in his professor Su. Vidhuyananthan’s play Ravanesa; he played the same role at the age of 70 with the same excitement. Maunaguru continued as a writer and an actor in Vithiyandan's Karnan Por (1962); performed at Peradeniya, Nondi Natakam (1963), Ravanesan (1964) and Valivathai (1966). He has been training and performing Arangatrukkai along with his students. He has been involved in modernizing traditional art forms and presenting them, after his retirement from government service in 2008.He has documented koothu, plays, folk music, and musical instruments. He was trained by Prof. K. Kailasapathy, K. Sivathambi and S. Vidhyanathan in the field of drama. Among the students of Maunaguru are Chidambaranathan, Balasukumar, Ganesan, Jayasankar, Selvi, B. Akilan, Kanagaratnam, (Valanadan), Cho Devarasa, Kalalakshmi, Elango, Mattakalppu, Seevarathinam, Anbazhagan, Sudhakaran, Inbamohan, Priyanthini, Ravichandran, Thavarasa.

In 2018, at the age of 76, he staged Mahakavi Rudramoorthy’s drama Puthiyathor Veedu in 1978 with Jaffna University students (fourth generation students). He has directed more than twenty plays. Maunaguru was instrumental in the debut of the Koothuruva drama in Eelam. He recreated the art with a contemporary modernization of content and aesthetics. Maunaguru mentions that preserving a tradition and rejecting change, in order to preserve the antiquity of a tradition leads to building a samadhi (grave). Maunaguru who believes that modernity must emerge through traditions, is well versed with koothu and dramas of the Sinhalese people and street koothu, koothu and drama traditions of Tamil Nadu and other parts in India. He restored the arts of Eelam and taught them to students. He is well-versed in explaining the Tamil koothu traditions in Sinhala, and explaining Tamil music and the musical instruments. He researched the relationship between Tamil and Sinhala arts in Srilanka. Maunaguru, who has performed and staged many koothu plays, has written many books on koothu. He has staged many mythical, epics, historical and societal stories in the form of plays and koothu.

Maunaguru's Ravanasen play, focusing on the life of Ravana, with elements of koothu, music, song, and rhythm is a remarkable work. Maunaguru's Thappi Vantha Thadi Aadu, a popular children's play is on the many plays that he has created and acted in.

Maunaguru's works often reflect the myths and culture of Eelam; they express ideas, thoughts, and guidelines such as social progress, equality, freedom for women, unity, peace, love, compassion, and the tragedies caused by war. 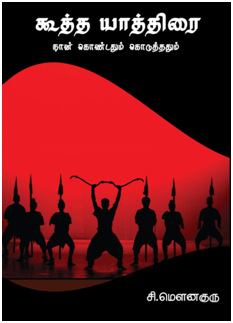 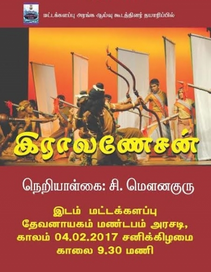 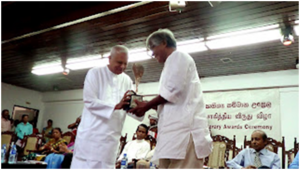