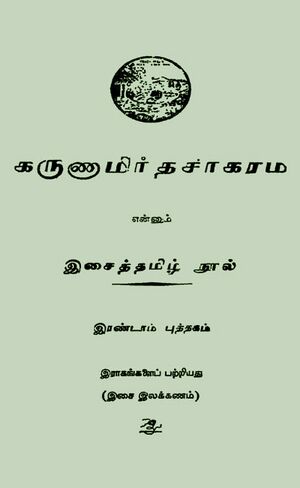 Abraham Pandithar wrote the music book Karnamirtha Sagaram (1917, 1946). It is a research book in the style of an encyclopedia about Tamil music’s cultural roots, historical context, melodic structure and forms underpinning the melodies. It is the first book of its kind in Tamil music.

In 1912, Tanjore Abraham Pandithar was doing his research in Tamil music. During the years 1912 to 1916, he organized six different musical conventions with his own funds. Many famous musicians from that era participated. The book is a digest of all the conversations, discussions, and research conducted during those conventions. The first book was published in 1917. The book had 1200 pages and was published in four volumes.

Abraham Pandithar passed away when he was finishing the second book of the series and had printed 256 pages of the three volumes. The book was finished by his daughter Maragathavalli Duraipandian based on the notes he left behind. His other daughter, Gnanaselvam, has also contributed music notes. In 1964, his son A. Sundarapandian published the second volume of the series. They were later published together.

Structure of the book 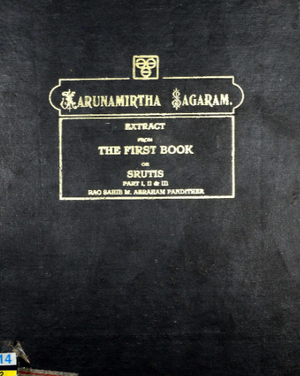 The First Book has 4 parts. 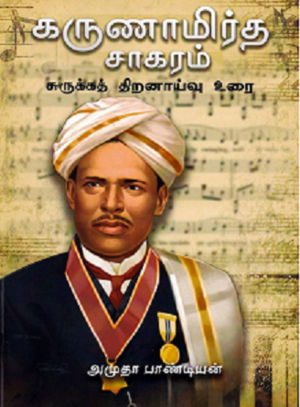 A detailed explanation is given with evidence about the three greatest and oldest Tamil Sangams, the continent of Kumari, and tsunamis. The book gives the rundown of all ancient musicians.

This article discusses music and physics. Abraham Pandithar describes the principles of shruthi[1] in this part. The mathematical equation of shruthi is explained in the context of 12 astrological cycles. Because twice the number 12 equals 24, he claims the shruthi count is 24 in the means of mathematical equations rather than 22 as defined by Sarangathevar.

Discussion pertaining to the place of melodies, and their structure in the world of Tamil music. Various faces of Tamil music are discussed within the context of an ancient Tamil text such as Silapathigaram dating back to the Tamil Sangam era.

Research results of Raga system and explanations of Ragaputam. The context of Silapathigaram's compositions is used to explore the depths and breadth of Tamil music in an analytical manner.

Anril Publications reprinted this book in 1994.

Venkata Magi’s book Sathurthandi Prakasikai describes the origins of 72 melakarta ragas. Melakarta is the origin of melodic structure. In other words, Melakarta serves as the base of all ragas. Melakarta can replicate another raga by following the founding principles. Janyaraga means it is derived from Melakarta raga. In his classification, Abraham Pandithar stated that 32 ragas out of 72 have the ability to stand as Melakarta-based ragas. Other ragas tend to be less used in the cultural space. It does not sound pleasant and is not capable of reproducing another raga based on its foundation. Abraham Pandithar began analyzing sruthi's in order to figure this out.

Setup of Sruthi is based on Just Intonation. There are 7 swaram's and 12 swara thalam's, each of which has 2 sruthis, summarizing to 24 or quarters of Sruthi. In contrast, Sarangathevar's Sangetha Rathnakaram and Bharathar's Natya Sasthram refer to the 22 sruthis. With the equal distribution it should be 24. Abraham Pandithar derives and discusses his conclusions against the backdrop of Indian musical tradition. When incepted, it had 24, but then switched to 22 in the middle, which is considered a wrong illusion according to Abraham Pandithar.

Raga sancharam has its own traditional thought process and has been passed down through generations in the Indian music tradition. There is no known reason for how swaras were structured. In Part IV of the first book, Abraham Pandithar goes into detail about this. After Abraham Pandithar's death, his daughter wrote about Ragaputam using the notes that her father had written. The method is still used today and is known as Pan Alathi (Alapanai). This is the root behind singing the melodic structure without the use of words, lyrics and talam. Porunthu Swara Kattangal is known as Harmonical Notes or Chords in European music traditions.